New Mexico Spaceport Authority’s Director of Aerospace Operations, Dr. Bill Gutman, said “Virgin Galactic continues to work steadily towards their goal of flying aspiring astronauts to space from New Mexico. We are excited by their progress.”

Spaceport America has experienced delays and cancelations due to the global pandemic but continues to provide essential services as set out by the Governor. Spaceport America’s employees are predominately teleworking from home, with limited staff supporting reduced operations for Spaceport customers.

“While the pandemic has slowed things down across our state, Virgin Galactic and our three other tenants have continued with their essential work. We have now seen two amazing glide flights by Virgin Galactic’s SpaceShipTwo in the last two months at our facility,” said Spaceport America’s Director of Site Operations, Chris Lopez.

Recently, Spaceport America welcomed two new related tenants, HAPSMobile Inc., a subsidiary of SoftBank Corp. and minority-owned by AeroVironment, Inc. Their specialized high-altitude aircraft has been assembled at the facility, and testing is due to start in the coming months.

Spaceport America (https://www.spaceportamerica.com) is the first purpose-built commercial spaceport in the world. The FAA-licensed launch complex, situated on 18,000 acres adjacent to the U.S. Army White Sands Missile Range in southern New Mexico, has a rocket friendly environment of 6,000 square miles of restricted airspace, low population density, a 12,000-foot by 200-foot runway, vertical launch complexes, and about 340 days of sunshine and low humidity.

Some of the most respected companies in the commercial space industry are tenants at Spaceport America: Virgin Galactic, HAPS Mobile/ AeroVironment, UP Aerospace, and SpinLaunch, with customers Boeing, EXOS Aerospace and Sugarhouse Aerospace regularly using the complex for testing and launches.

This glide flight marks the inaugural solo flight of VSS Unity in New Mexico and as such is an important flight test milestone in preparation for commercial service.

On SpaceShipTwo’s flight deck were Dave Mackay and CJ Sturckow who, together with the team in Mission Control, executed some of the key elements of a spaceflight profile. These included take-off and landing along with high-altitude release from the mothership, VMS Eve, which was piloted by Michael Masucci and Kelly Latimer.

The flight took off from the Spaceport America runway, with VSS Unity attached to the carrier aircraft, VMS Eve. The vehicles climbed to an altitude of 50,000ft before Unity was released, at which point VSS Unity flew freely for the first time in New Mexico airspace. The spaceship achieved a glide speed of Mach 0.70 and completed multiple test-points, before touching back down smoothly for a runway landing at Spaceport America.

This test flight was conducted under a set of stringent operational protocols to ensure safety against COVID-19. Its successful execution was made possible by a concerted effort to redesign all the operational elements required for safe flight test while meeting new health and wellness protocols. These protocols include changes to the work areas and procedures to enforce social distancing as advised by state guidelines as well as universal mask usage.

This flight milestone represents a major achievement which has been in the planning since SpaceShipTwo relocated to Virgin Galactic’s New Mexico commercial headquarters in February. Virgin Galactic also fully concluded the relocation of its spaceline operations team and their families to New Mexico.

This glide flight provided the first opportunity to test all the components required to fly the carrier aircraft and spaceship in glide configuration, from a new home base and in new airspace. Dave and CJ performed a series of maneuvers with VSS Unity designed to gather data about performance and handling qualities in order to enhance our aerodynamic modeling and verify against similar maneuvers that were performed earlier in Unity’s test flight program. The flight test also provided an opportunity for the pilots and spaceflight operations team to continue familiarisation with the new airspace around the Gateway to Space and a chance to capture valuable in-flight data and conduct further pilot training.

Preparation for the next flight will now begin, starting with an in depth analysis of today’s flight data.

George Whitesides, CEO of Virgin Galactic and The Spaceship Company said, “I’d like to congratulate our team for reaching this flight milestone, especially during these challenging times. I am grateful for the commitment displayed by everyone involved, not only in helping to support relief efforts in both New Mexico and California, but also for the dedication and creativity which will allow us to continue safely towards our goal of commercial launch.”

“Today’s VSS Unity flight is another exciting milestone for Virgin Galactic’s progress in New Mexico. We are extremely happy and proud of Virgin Galactic, not only for today’s success but also for the exceptional way they have integrated into NM and supported the region and State during this stressful time dealing with the COVID-19 pandemic. Spaceport America and Virgin Galactic have adhered to new guidelines set by Governor Michelle Lujan Grisham to include social distancing and wearing masks. A big thank you to our foundational partner at Spaceport America!” said Dan Hicks, Executive Director of the New Mexico Spaceport Authority.

Virgin Galactic Holdings, Inc. is a vertically integrated aerospace company, pioneering human spaceflight for private individuals and researchers, as well as a manufacturer of advanced air and space vehicles. Using its proprietary and reusable technologies and supported by a distinctive, Virgin-branded customer experience, it is developing a spaceflight system designed to offer customers a unique, multi-day, transformative experience. This culminates in a spaceflight that includes views of Earth from space and several minutes of weightlessness that will launch from Spaceport America, New Mexico. Virgin Galactic and The Spaceship Company believe that one of the most exciting and significant opportunities of our time lies in the commercial exploration of space and the development of technology that will change the way we travel across the globe in the future. Together we are opening access to space to change the world for good. 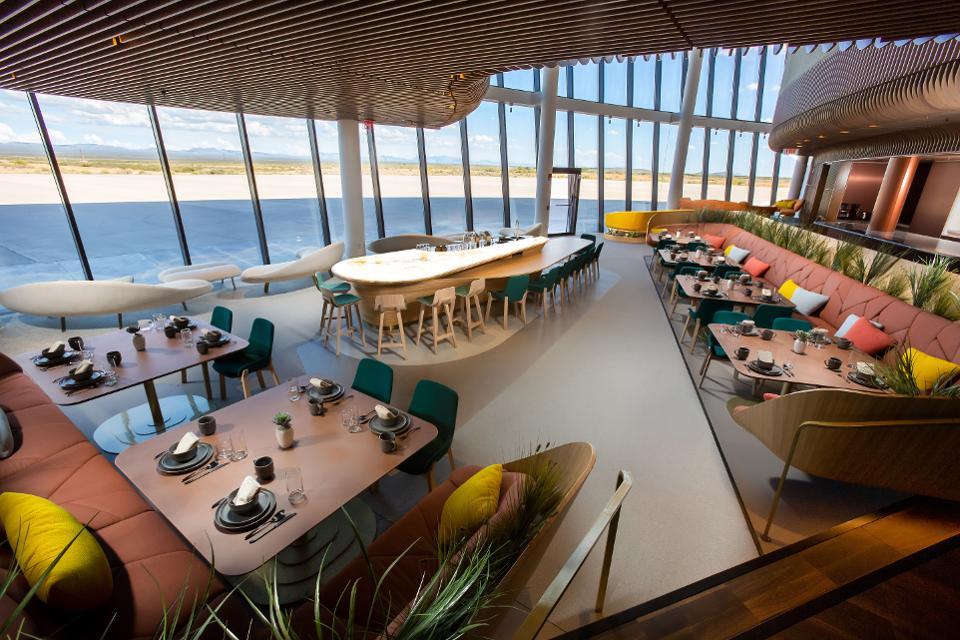 Las Cruces, New Mexico, USA (15th August 2019): Virgin Galactic today revealed the first look at the interior fit-out of its Gateway to Space building at Spaceport America in New Mexico. The work completed showcased two floors of the building primarily focused on spaceflight operations, which also incorporates communal spaces designed for use in the future by Virgin Galactic customers, along with their friends and families. Completion of this interior work means the spaceport facility is now operationally functional and able to support Virgin Galactic’s flight requirements.

One of the hallmarks of the Virgin brand for over nearly half a century has been the use of inspired and bold design to transform customer experiences. It is an ethos that has been successfully applied across industrial sectors and design disciplines. From aircraft cabins to hotel bedrooms and from fitness classes to bank accounts.

Virgin Galactic has striven to remain faithful to that tradition by choosing an elegant, experience-focused concept for the space launch system itself. Similarly, the company’s choice to operate from Spaceport America in New Mexico was due in no small part to the state’s decision to commission landmark architecture for the world’s first purpose-built commercial spaceport. The Foster + Partners Gateway to Space facility pays homage to the past in its respect for the ancient surrounding landscape while powerfully embracing the future through energy efficiency and sustainability. It was also specifically designed to enable Virgin Galactic to create an unparalleled experience as its customers prepare for journeys of a lifetime before graduating as astronauts.

The first floor is focused on our home planet, and is named Gaia, representing the point of departure and return, as well as the purpose of each astronaut’s journey. The color palettes and the use of natural materials aims to bring the stunning landscape which surrounds Spaceport inside. The floor design, furniture and fittings promote social interaction and human discourse – a sense of togetherness and unity. An elevated, interactive digital walkway will heighten the departure experience for the Future Astronauts and their friends and family as they set out from Spaceport to VSS Unity on the day of flight. The Earth-focused design will provide a fitting welcome to those newly-graduated astronauts returning from space with a new appreciation and understanding of our home planet.

Gaia is subtly and unobtrusively zoned into practical, formal and informal spaces which will host the space operations team, Future Astronauts and their family and friends. It serves as the social hub of the building, where everyone is part of the Virgin Galactic family; Future Astronauts will share breakfast with spaceship pilots, grab coffee with rocket engineers and pass the time of day with the team from Mission Control.

The focal point of Gaia is the Barista Island, a central bar made of back-lit Italian marble hovering above hand-crafted oak providing a social hub for our hospitality team to engage with guests and staff. Spaceflight preparation will unite our teams with our Future Astronauts in the pursuit of a common purpose. The Barista Island within Gaia will help to foster that sense of camaraderie and the determination to deliver each Future Astronauts’ personal mission.

The second floor is named Cirrus, representing light, air and flight. It is the beating heart of spaceflight operations, and is connected to the community hub of Gaia below through a double height atrium. The color palette graduates from the earthy tones below in Gaia to lighter white and grey shades, reflecting the skies beyond and providing a clean environment supporting operational focus.

This area is home to Mission Control, the Mission Briefing Room, the Pilot Corps and the rest of the Flight Operations team.

Mission Control enjoys a dedicated space which allows focus on flight operations. Outside this space, the Flight Operations team and the pilots are positioned to give an unrestricted view of ground operation areas including the apron and runway.

Virgin Galactic’s space fleet will be housed in the Gateway to Space hangar which is already home to VMS Eve. This huge expanse in the middle of the building is large enough to accommodate two carrier aircraft, each with a wingspan of 140 ft along with five SpaceShipTwo vehicles.

The unveiling of Gaia and Cirrus brings to life a beautiful, world-first and world-class facility and means that Spaceport America’s Gateway to Space is now functionally operational – ready to host the remaining portion of Virgin Galactic’s test flight program before welcoming its very first Future Astronauts.